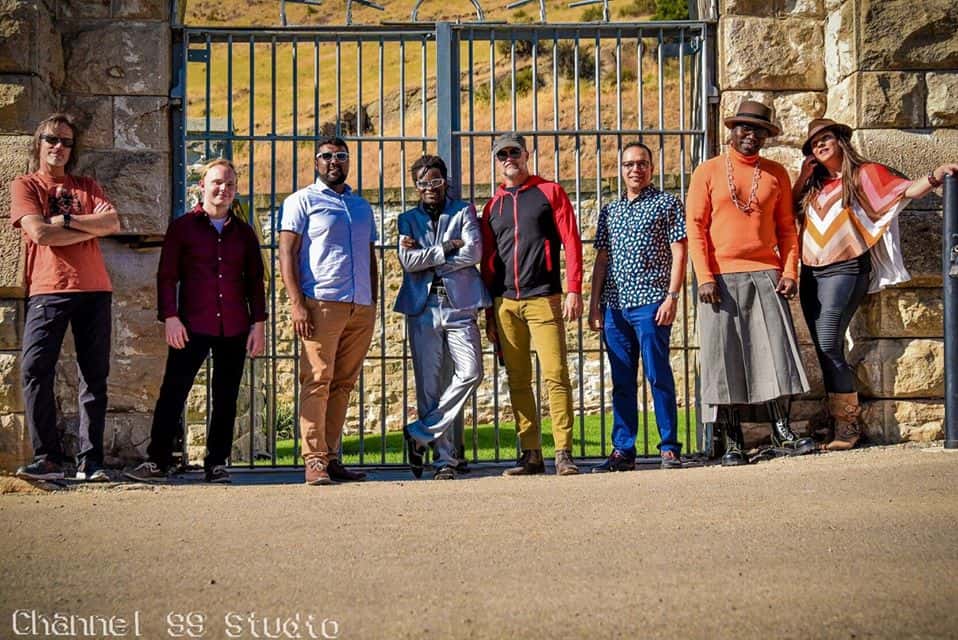 How’d a farmboy from Northern Idaho and a Yoruba boy from Lagos West Africa come together to
create genre-bending, eclectic music in Boise, Idaho?

For Dayo Ayodele, it started when at age 22 he migrated to study film in California. It was his first trip to the United States and without family or friends to ease the transition, he launched into his early adult life as a student. Thanks to his Grandma’s influence, he grew up playing African percussion instruments at church and was entrenched in deep cultural traditions and music, but it wasn’t until moving to Idaho years after obtaining his film degree that he brought his drumming into his life in the US. Just like back home in Nigeria, it proved to be a way to connect with people in the community and build a new beginning in Boise. The city was multi-cultural however many communities kept to themselves and Dayo begin to see the power music had to pull people together.

About the same time Dayo was studying film in California, Todd Dunnigan made the decision to drop out of college. Music’s call was so strong there was no other choice. So he hit the road playing and touring with a variety of musical acts singing and playing keyboard. His career progressed to include starting The Audio Lab recording studio, being a side musician for a huge variety of artists, and a professional job playing piano for a Southern Baptist church. Piano players love Gospel music like guitar players love the Blues and the same was true for Todd.

The paths of these musicians merged at the right moment in time and they brought their creative forces
together to deepen the styles and messages in Afrosonics’ sound. Out of the desire to bring
communities together, Afrosonics creates music featuring a collective of musicians from the Middle
East, Europe, Africa, South America and the United States. At the heart of the group’s progression, the
band has conscientiously integrated new American musicians (former refugees from war torn areas of
the world) into the collective that is Afrosonics. The genre twist deepens with the infusion Idaho musicians into the collective with roots in country, rock, jazz and opera. Every nation voices bring many paths together in one musical destination.

Since their inception in the summer of 2013, AFROSONICS has performed at venues such as the Treefort Fest, The Festival at Sandpoint, World Village, Folklife Festival (Seattle), Art in the Park, Boise 150th Celebration, and other social gatherings. Their eclectic blend of influences will surly help others appreciate the rich tapestry of world culture through the magic of music.

**Tickets will be capped at 250 to allow for social distancing**

Admission may be purchased the night of at the gate, in advance online, or by visiting the Garden office:
Garden Box Office Hours: Monday-Friday from 9-4 p.m.

Tickets will also be available for purchase at the gate the evening of the concert.

E-tickets (delivered in a separate e-mail) can be taken straight to the gate to be taken the night of. For online sales, members receive their discount at the check out screen once they sign in or register with the online sales program.

Seating is limited in the Meditation Garden. In order to keep guests safe and to maintain social-distancing we encourage you to explore our many acres and spread out into the various garden spaces.

Food & Drink
Visitors are welcome to bring in their own food and non-alcoholic beverages.

Adult beverages may only be served by appropriately licensed vendors. We know all who enjoy supporting the Garden and Garden events are also proponents of buying local efforts, so we are happy to announce the change has brought about a new level of partnerships with local vendors. These partnerships ensure there are reasonably priced beverages for purchase at each event. We look forward to seeing you in the Garden soon and hope to raise a glass with you. Please help us thank those vendors who are also supporting the Garden this year as a portion of every sale will return to the Garden.